Etienne Morel, Jean-Louis Petit, Johannes Friedrich and Bernhard Rudolf Konrad von Langenbeck…
The names of these gentlemen are not widely known. But millions of people who have survived thanks to the tourniquets should be very grateful, first of all, to these four people.

Starting from the 17th century and till the Second World War each of them greatly contributed to development of any instruments for bleeding control.
The first samples of modern tourniquets with crowfoot mechanism (something like improved boxes by Etienne Morel) appeared in the late nineties. Americans were the first in this process. The prototypes were extensively improved and modified, and they started to be more and more popular among military and medical men, and soon among civil people as well.
For the last three decades while performing some missions in the countries of Middle East the NATO military forces have gained both fighting experience and very important medical experience in urgent prehospital help.

On analyzing statistical information, health professionals found out that about 75 per cent of battlefield casualties was caused by extensive bleeding, and the most of the injured with any damages of great vessels had very high chances to survive in case of timely bleeding control.
Later these statistical data and economical statistical information were combined.

The NATO country-members spent from one million to some dozens of USD millions on training one highly qualified military specialist, and it took approximately from 5 to 20 years (subject to the military branch). Soldier’s death caused by failure to stop bleeding undermined the chances to perform the tasks almost to zero, moreover, it tactically made any military unit weaker, and achievement of strategic goals was under the threat of failure, it brought to naught all the enormous financial resources spent by any country on military specialist training.
Ideological factor was one of the constituent too. The democratic countries – members of the NATO which declared person’s life as the highest value, could not bear with such defect in the military medical pack. The military officer’s image was on the line.
It was high time for urgent need in tourniquets and hemostatic agents which are reliable and fast in use at the same time, but also it needed correction and improvement of available battle site rescue protocols.
And at last in 2004 as a result of wholescale battle site and laboratory experiments carried out by the military institute of surgery of the USA (USAISR), the old rubber Esmarch’s tourniquets were substituted by new tourniquets recommended for using by military and rescue officers:

This is the improved sample of classical tourniquet with plastic windlass.
Turning of the stick increases the pressure on the limb and on great vessels. It consists of synthetic adhesive tape, internal sling, buckle, fixing bracket of the windlass, and the windlass itself. It is possible for any experienced user to stop bleeding within 30 seconds with just one hand. 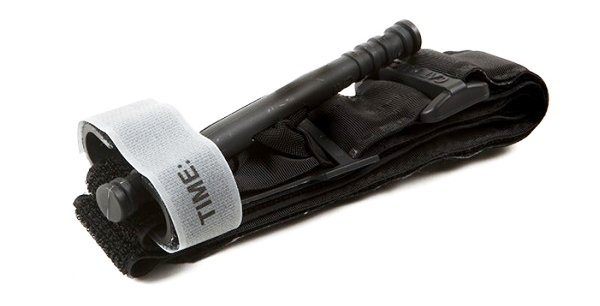 This is the improved sample of classical tourniquet with plastic windlass.
Turning of the stick increases the pressure on the limb and on great vessels. It consists of synthetic adhesive tape, internal sling, buckle, fixing bracket of the windlass, and the windlass itself. It is possible for any experienced user to stop bleeding within 30 seconds with just one hand. 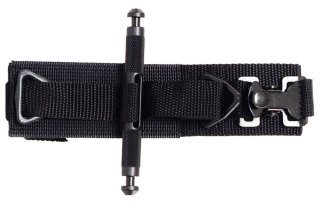 It is an enhanced sample of classical tourniquet with metal lever rod. It consists of wide synthetic tape, V-type buckle with a wide hook and a sliding bar, triangular fixing unit for level rod and the lever rod itself. The peculiar features of this construction enable to fix the tourniquet quickly on the limp and to block bleeding with just one hand.

This tourniquet was designed upon the request of the Ministry of Defense of the USA, and later the first responding services accepted this device for usage. It is made as C-shaped hook. The tourniquet consists of synthetic tape, buckle, turning mechanism and lever rod in the form of semicircle. It is applied around a limb by one hand. Thanks to special turning mechanism it is possible to regulate the pressuring force and to unfasten the tourniquet quickly, if necessary.

This tourniquet was designed upon the request of the Ministry of Defense of the USA, and later the first responding services accepted this device for usage. It is made as C-shaped hook. The tourniquet consists of synthetic tape, buckle, turning mechanism and lever rod in the form of semicircle. It is applied around a limb by one hand. Thanks to special turning mechanism it is possible to regulate the pressuring force and to unfasten the tourniquet quickly, if necessary. 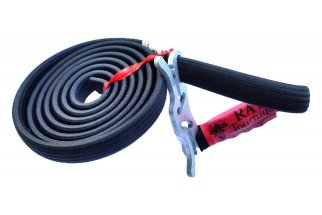 The tourniquet is designed as a flat lacing from a resistant vulcanized rubber with nylon cover which is 121 cm long, 0,6 cm wide, and it is fixed on the aluminum block with one end. The tourniquet is fixed by its wrapping around a limb and drawing a loose end into the hole of aluminum fixing block by forming a self-tightening loop. The pressure increases with each new turn of the tourniquet around a limp (Esmarch type). 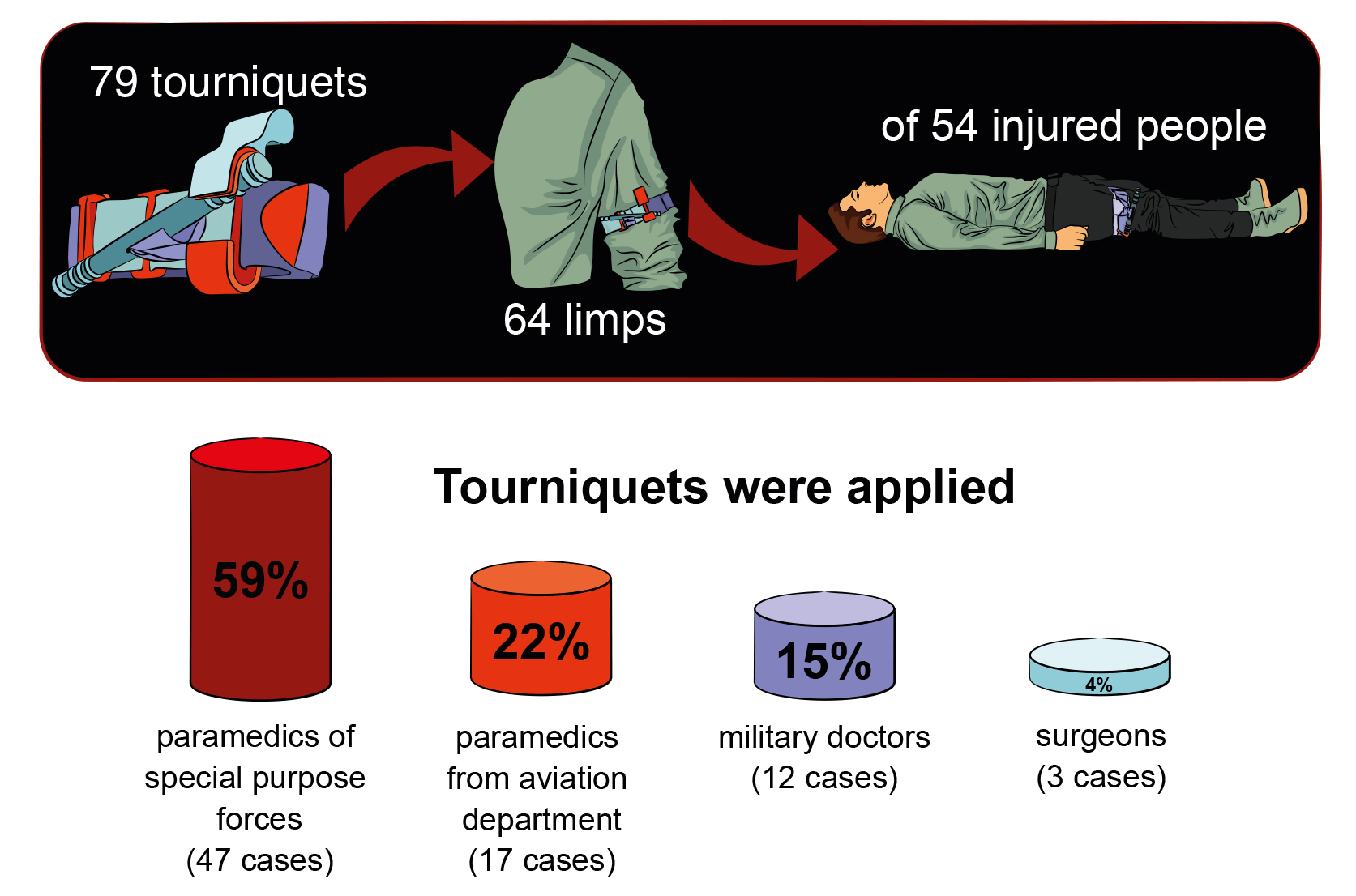 Upon delivery of the injured to hospital it was found out that 54 of 65 limps had pulsation, but pulsation was not observed in 11 limbs. In 83 per cent of cases the tourniquets were applied for stopping venous bleeding, and only 17 per cent was used for arterial bleeding control. However, only in 5 cases from 14 cases the tourniquets were applied for arterial bleeding control in proper way. The statistical data were published in JSOM magazine in 2013. 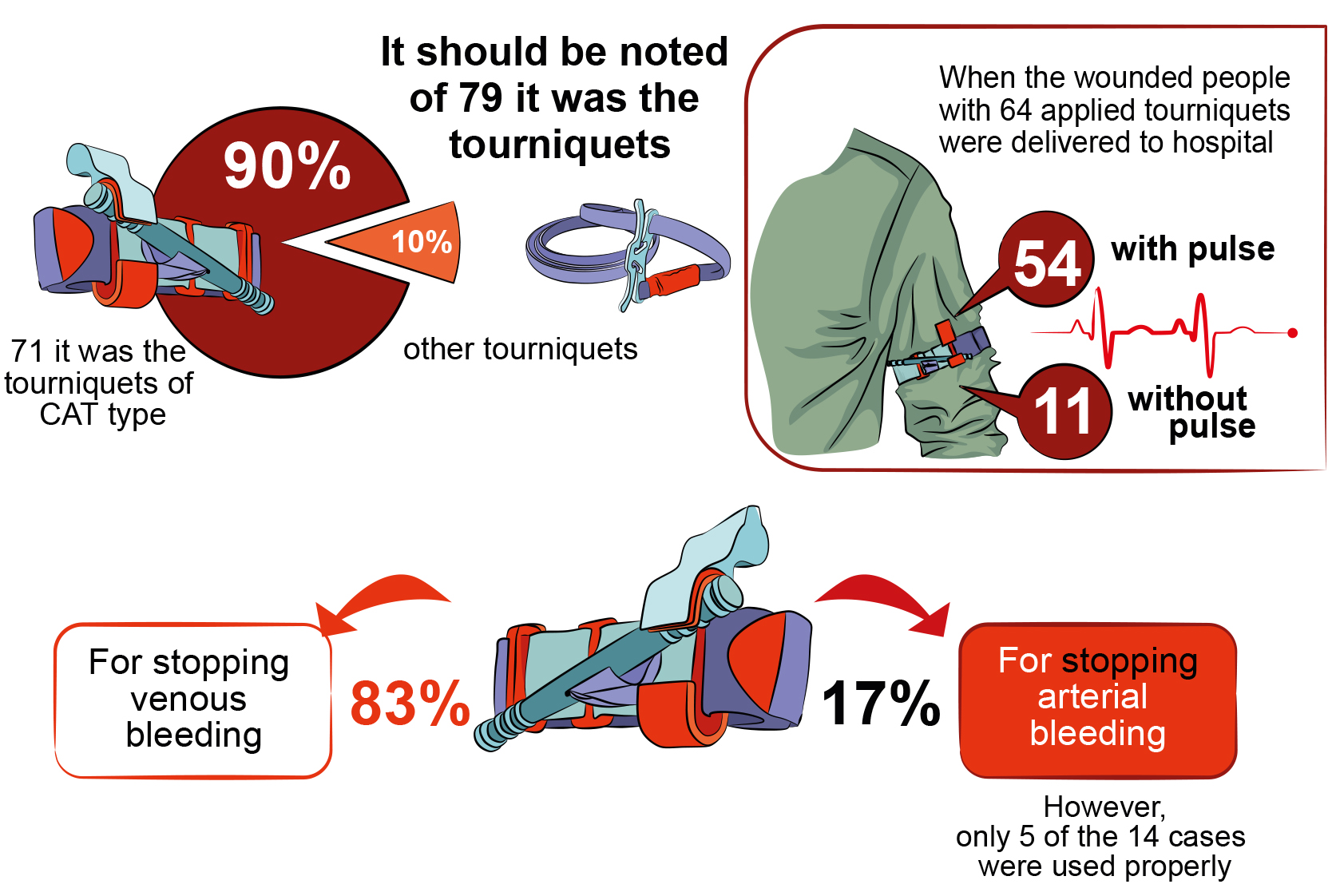 In the same 2013 the Military Medicine published the results of field tourniquets testing for period from February to May 2010 conducted by the 1st battalion of the 6th naval infantry regiment of the USA. The military officers found out that keeping the tourniquets out of the individual medical pack, namely, on the breast or unloading, decreases their efficiency for 43 per cent. Negative effect of high and low temperature, and ultraviolet light on synthetic material was proved with some features.

European countries also did not stay aside from historical processes. Crimean annexion and the war on the east of Ukraine greatly influenced on the development of military and field medicine. It should be noted that military medicine of Ukraine made its way from complete decay to a sudden recovery just for some years. And if during the first year of the war the foreign detachments assisted Ukraine in delivering the first aid and trained the medical staff, and the national medical packs of soldiers were completed according to the standards of 50-ies years, in some years the country started production of national modern devices for bleeding control, and it shares its unique experience in using them on battle site with the whole world.
Constant military actions in the state of limited financial resources, death of thousands of military and civil people forced Ukrainian doctors, chemists and volunteers start national development and production of efficient and available medical and chemical hemostatic agents.
So, as a result of laboratory testing and hundreds experiments on the field, the first Ukrainian chemical kaolinic hemostatic agent was designed and put into production in 2015. According to its efficiency criteria it left behind the famous American Quick Clot. Moreover, SICH-Tourniquet, the tourniquet for bleeding control with crowfoot mechanism, was introduced to the world, it is the improved and strengthened enhanced hybrid of two worldly famous versions of tourniquets, САТ and SOF-T.

SICH-Tourniquet (Strengthened Individual Combat Hybryd Tourniquet) is a strengthened hybrid of two famous tourniquets. It is achieved through using metal strengthening components.   Due to aluminum furniture and special patented adhesive tape, integral structure and telescopic platform, this unique tourniquet stood under double pressure and worked successfully even being dirty from bleeding, from any grease or oil, and it didn’t lose its efficiency at extremely low or high temperature (-40 / +50). The tourniquet did not impact     soft tissues at its application. Moreover, it can be applied with just one hand.

In summer 2015 the independent consumers and experts (doctors, volunteers and military people) have conducted extensive testing of tourniquets made by famous Ukrainian producers of those times. Based on the results of testing, SICH-Tourniquet occupied the first place and later it became the official tool for individual packs in the Military Forces of Ukraine, which were packed according to NATO standards, and for packs of Ukrainian National Guard and Police.

The history of tourniquets testing is enriched with new events.

At the end of 2017 the volunteers of Wilni UA Ukrainian Charity Fund initiated and organized detailed examination of Ukrainian and American tourniquets. Based at Ukrmetrteststandard State Company (the company is worldly certified), the qualified employees and instructors of TSSS conducted extensive examination of reliability, performance and stability of modern tourniquet samples. Without any exaggeration it should be stated that there were not any similar tests in Ukraine and, in particular, in the world.

In the course of testing the specialists studied tourniquets capability to keep relatively constant pressure effecting on any limb (350-300 Mmhg) for two hours under the following conditions and in such modes:

Considering the results of testing, SICH and CAT7 had the best features, but SICH showed better results at low and high temperature.

The examination protocols and tests video can be watched, if to click on the relevant link.

One of the most famous medical protocols of pre-hospital aid in combat conditions was developed by the Department of Military Medicine of the USA in 1996 (TC3 — Tactical Combat Casuality Care). According to this protocol one should make the following:

Tourniquet is the first and the most effective device for bleeding control.

Tourniquet application and vascular occlusion is one of the most important operations among all the actions of the first aid for great vessels bleeding control.

The tourniquet and necessary skills save life of military person on any battle field, or any Mechanical tourniquets of new generation (SICH, CAT, SOF-T) are applied successfully within 10-30 seconds individually with just one hand.

The methodology of tourniquet application is different subject to its structure. But the general rules are constant and stay without any changes:

The imaginary “red” indicator of time which should not be exceeded is 2 hours. In most cases the limb is lost not because of the applied tourniquet, but, mainly, projectile traumas followed by major bleeding caused by extensive injuries of soft tissues, great vessels, cartilages and bones.  High kinetic energy of bullet slug or a piece of mortar bomb produces missile wounds, and there are secondary wounds of great vessels and limbs breaks.

In case of gunshot wounds it is very important to consider the nature of wounds, if it is а through-and-through or blunt wound. It is conditional upon the fact the outcome bullet hole can be located far from its income hole, so improper diagnostics can be the reason for critical bleeding and death of wounded person at transportation.

Military conflicts in different corners of the world do not disappear and make the power players to search for diplomatic and military solutions. Efficient tools in soldiers’ medical boxes along with weapon and diplomacy strengthen the position of some states at the international political arena. That’s why, the developed countries pay their attention to improvement of available devices for medical pre-hospital emergency. And who knows, maybe, a new revolutionary instrument for saving people’s life is born now in the laboratories of leading institutes.